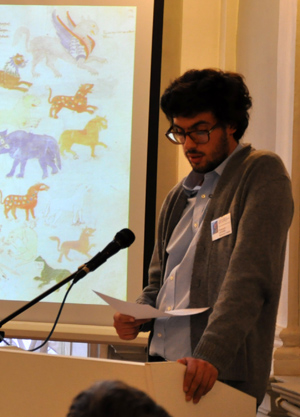 Among the regions of Southern Italy under the Byzantine influence, one of the most prominent was the Terra d'Otranto, where a particular type and artistic language was developed. Here in 1289 (as noted in the colophon at f. 219 r.) was compiled a copy of Michael Glycas' Chronicles, written in the middle of the XII century, which record the events from the creation of the world to the death of Alexius I Comnenus (1118).
The choice of such a text as the Chronicles reveals the existence of a cultural élite, born during the age of Frederik II and still prolific at the end of the XIII century, which continued to look at Constantinople as a guide — even under the Anjou — and was able to commission a volume of a work that seems to be almost completely unknown outside Bosphorus.
But the metropolitan spirit of the codex contrasts with the style of its illustrations that reveal undoubtedly a grichus' (the adjective “grichus” refers to the Greek dialects of Southern Italy) milieu: the Marcian codex is marked for the search of varietas in the decorative choices, which results in a figurative repertory taken over not only from other codices, but from ivories, sculptures and mosaics. The variety of media sources grows up in parallel with the variety of images presented: the codex should be seen in this way as a little compendium of iconography, showing animals taken from the Physiologus, religious scenes such as the Crucifixion, and also historical refererences like the Mandylion taken from Edessa to Constantinople.
The aim of this communication is therefore to present the figurative apparatus of this precious manuscript, which rarely was the subject of critical interventions (Furlan 1980, Canart 1982) in the past century, and to reconstruct the milieu where the codex was produced.